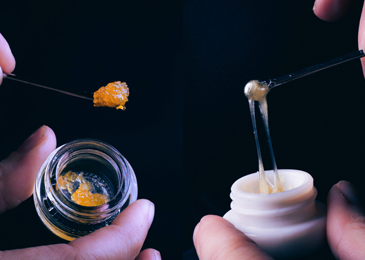 2022Dabs and ConcentratesLearn About Cannabis

There’s a whole world of different types of concentrates, or dabs, in the cannabis market.  Shatter, batter, butter, sauce, diamonds…the list goes on and on.

We are here to let you know all about the different types of concentrates!

What is the Difference Between Different Types of Concentrates?

The key differences in concentrates are, firstly, how they are made and what extraction process is used.   Secondly, the texture of the concentrate in its final form.

To simplify, concentrates have two main categories: Solvent-based and Solventless.  In our article about how concentrates are made, we go further into detail about the process of creating our favorite dabs, but we will give a brief overview here.

The Breakdown: Solvent-based vs. Solventless

These concentrates are going to be Resins and Live Resins, and distillates.  These are often referred to as “BHO” or “Butane Hash Oil”, which has become an umbrella term for all hydrocarbon extracts, or solvent based.  The texture then may be used to name the product, as we will discuss below.

These are going to be Water or Ice Hash, Rosin, Rosin Sap, and Sauce, and even Diamonds.

Yet, dabs aren’t always just labeled as “Resin” (which would be a solvent-based extract) or “Rosins” (which you already know are solventless).  Often, concentrates are named for their texture regardless of their origins, which is most likely what you see on the labels.

Let’s talk about the different textures you can find in concentrates.

The Different Textures of Concentrates

Shatter was probably the most widely known type of concentrate for many years.  The process of creating shatter is typically a solvent-based extraction method where the resulting oil is left still to purge and, ultimately, harden like glass (which is where the term “shatter” comes from).

The only difference between shatter and batter or wax is that the oil was left un-agitated, whereas wax/budder/batter/etc. are whipped or agitated after the initial purging process.

Shatter, like all concentrates, is typically dabbed.  The only downside to this type of concentrate is that it is harder to control and manipulate but is otherwise comparable to other concentrates.

Next, we will talk about “Batter/butter/wax”.  This consistency of concentrate usually begins with a Resin (created using solvent-based extraction like a Butane Hash Oil), though is occasionally created using a Rosin (solventless concentrate).

After the oil has been extracted from the plant and “purged” (allowing the residual gas to escape), the resin is then whipped for some time to incorporate air into the mixture and further purge the gases from the oil.

The amount and length of time a concentrate is whipped will make it more or less creamy.

This process is what creates the creamy texture batters, butters, and waxes are known for.  All of these are easy to manipulate and control with a dab tool.

Because these oils are easy to control, they are some of the most popular types of concentrates on the market.

Diamonds and Terpene sauce are created from Live Resins, which means that the cannabis is flash-frozen after harvest, leaving many of the fragile terpenes present in the plant.

Because the flash-frozen plants retain more terpenes (the aromatic component of the Cannabis plant), the end result leaves a sauce with much more of these terpenes present.  Higher quality, flash-frozen cannabis creates higher quality extracts, which is where diamonds and sauce really shine.

After the plant is flash-frozen, it goes into the solvent-based extraction methods discussed in our article, “What are Dabs?”  From here, the live resin is then jarred, where pressure builds and creates THCA crystals, which then sink to the bottom of the jar.

What is left on the top is the juicy terp sauce we know and love, and those crunchy diamonds are left on the bottom.

Sugar is another concentrate texture between batter and Diamonds (though with a much more similar texture to a batter).  Tiny THC/THCA crystals form about the size of sugar crystals and float in a juicy mix of terpenes.

This type of concentrate is also simple to manipulate with a dab tool and is another one of the most common forms of dabs.

Are Some Dabs Better Than Others?

The short answer to this question is yes, some dabs are absolutely better than others.  This has less to do with the type of concentrates and more to do with the quality of material used.

It should be noted that many people will argue that solvent free concentrates are always better than solvent-based concentrates but, again, this has more to do with the quality of the cannabis used to create the extracts.

Ultimately, it is up to you to try different types of dabs with different consistencies until you find what you like most and what strains work best for your needs.

Check out our online store and shop our full selection of concentrates!  Remember, on Terpy Tuesday we give 10% off all concentrates. We always have free delivery*!