One of the first questions anyone asks when starting their journey into cannabis is, what are dabs?

Dabs are a concentrated form of cannabis that are favored for their high potency and broad flavor profile.  They are smoked by vaporizing a small amount or a “dab” using high heat.

Smoking cannabis concentrates is many people’s favorite way of smoking. Despite their popularity, there are still many people who don’t understand what concentrates are, how they are produced, or how to smoke them.

We are here to unveil the mystery. 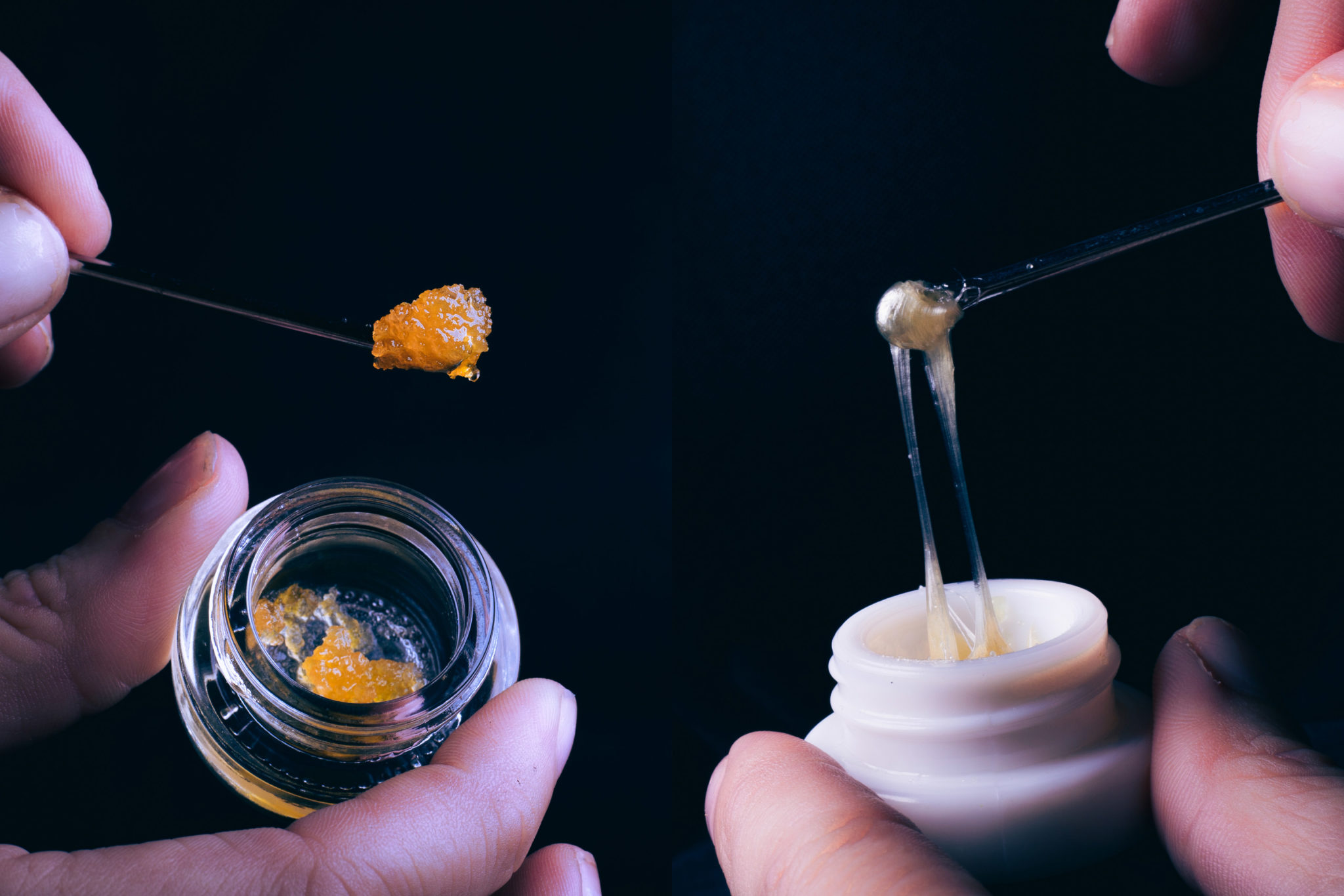 Concentrates, or oils, are often named after their textures or their extraction methods. These can include

The texture of the concentrate is also often used as its name (sauce, diamonds, batter, butter, shatter, sugar, wax, etc.), but are ultimately the result of two different extraction methods, which we will discuss below.

Concentrated Cannabis: What are dabs?

Dabs are a highly concentrated cannabis oil created by extracting key compounds from the cannabis plant.  While there are many different processes to create concentrates, all of them are based on extracting the cannabinoids and terpenes of the plant while leaving all excess plant material out. What is left is a very highly THC-concentrated oil, often reaching above 90% total cannabinoids.

Cannabinoids are chemical compounds found in cannabis, the most prominent being THC, the main psychoactive ingredient in cannabis. There are many other cannabinoids, including CBD, CBA, CBG, and numerous that have yet to be researched.

All of these compounds are found at varying levels in the cannabis plant.

Terpenes are compounds that give plants a pungent smell. While they are most prominently mentioned when talking about weed, these compounds are responsible for many other scents plants give off, including pine, lavender, even the citrus smell of an orange peel.

How are THC concentrates, or dabs, made? 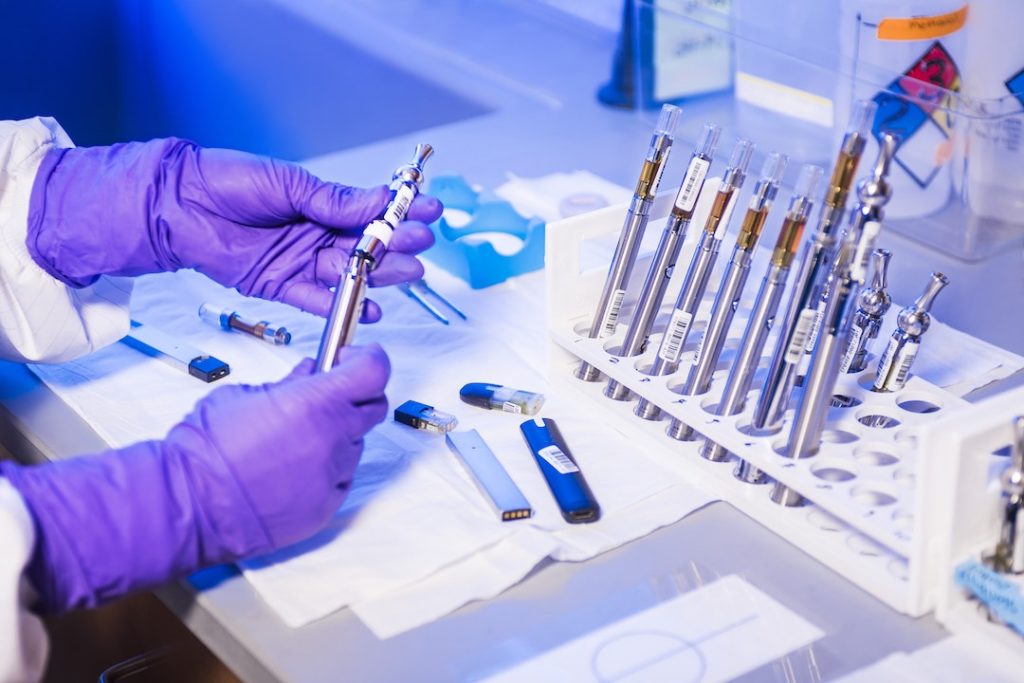 High THC content cannabis products are made by is extracting THC from cannabis flower in a lab. Cannabis products like live resin, badder, budder, live rosin and crumble are all produced by removing most of the fibrous plant material and leaving only the terpenes and cannabinoids into a solid, honey-like goo or “wax”.

These techniques essentially boil down to two processes: Solvent-based and solventless extraction.

Oils are often created using chemical solvents, such as butane, Co2, or a mix of propane and butane to strip the cannabinoids and terpenes from the plant. Isopropyl and chloroform can also be used in the process.

First, the cannabis plant is placed into a closed-loop system where extremely low-temperature butane (between -20 to -50 degrees) is then pushed through the plant, which is what strips the cannabinoids and terpenes from the plant matter.

The liquid butane (which now contains all of the amazing compounds we are looking for) is then run through a slightly warmed chamber where the butane “burns” off of the other compounds and is then returned to the cold chamber (hence the cold loop system), leaving concentrated cannabis oil behind.

When a plant is flash-frozen whole after harvest, the oils that ensue are known as Live Resins (meaning that the entire plant was flash frozen immediately after harvest).

Because flash-freezing the plants leaves the plant and, more importantly, the trichomes more brittle, extreme care (and of course low temperatures) must be used to ensure no damage is done to the plant during the extraction process.  This is one of the reasons that contribute to a higher price tag.

All terpenes can be broken down into two categories: monoterpenes and sesquiterpenes.

Monoterpenes are extremely light terpenes and evaporate off the plant very quickly after the plant is harvested. This is why the flash-freezing method can preserve more of the plant’s naturally occurring flavor profiles; the process freezes these delicate terpenes and retains them. This means that a live resin will be closer to the “true” flavor of the plant than dried cannabis flower will.

CRC is a method used to further purify a concentrate. The concern of many is that there are still trace amounts of butane present in the oil after the extraction process. For many, this poses a considerable health concern, which is why CRC was created.

Color Remediation Column is a filtering process where oil is pushed through a screen of three tightly packed substances (T5 bentonite clay, silica gel, and Magnesol) in a filtering column. The process removes any residual butane and any other contaminants still present in the oil, leaving a lovely yellow, clear, and pure oil.

The process has become slightly controversial, as the original oil processed through CRC may be a low-quality, highly contaminated oil which, after the process, looks like a high-quality live resin but is only a low-quality oil that looks good.

Co2 extraction is also common and uses co2 (which is a famously safe solvent that is present in the air we breathe) to extract the oil.

Similar to butane extraction, the Co2 is put under extreme pressure and cold temperatures before being “pushed” through the plant, resulting in the stripping of the cannabinoids and terpenes.

After the oils are extracted, they are often distilled to leave only the THC or the CBD, resulting in an extremely high concentration of these substances while eliminating all the other cannabinoids and terpenes, making it colorless and tasteless (which is why it is often used in edibles).

Solventless extraction is exactly what it sounds like: an extraction process entirely free of chemical solvents.

The main types of solventless concentrates you will find are hash and rosins.

Bubble hash is created by putting dried or frozen cannabis into a chamber of water and ice and shaken, separating the trichomes from the plant. The water is then filtered through a series of screens, leaving some delicious hash ready to go.

Rosin is the result of taking cannabis flowers or hash and applying a small amount of heat and pressure.

The result is a high-quality concentrated oil.

Because the process of creating rosin is so simple, it is a favorite of many as it can easily be done at home.

Live rosin is the same thing, but applying heat and pressure to a fresh cannabis plant, which preserves a greater amount of terpenes and cannabinoids present in the plant.

How to Smoke Dabs

How To Dab Concentrates are typically “dabbed” or smoked using high heat instead of a flame or through a vaporizer or water pipe.

Carts are also a popular form of smoking concentrates, as it is easy to control your dosage and is extremely discreet, allowing you to smoke on the go.

Dabbing, on the other hand, is a more involved process where you heat a specialized glass bowl on a water pipe (known collectively as a “Dab Rig”) to extreme temperatures using a torch, and then placing the oil into the bowl where it is capped, vaporized, and then smoked through the bong.

There are portable dab rigs that do the same thing as a traditional dab rig, but the temperature can be controlled and can be used on the go.

It is recommended to start with a very small amount (maybe even less than the size of a grain of rice) until you understand the full effect concentrates will have on you.

Dabbing is Simple Once You Know a Few Basics

Dabbing Cannabis Concentrates are a favorite way for people to smoke, as it provides excellent taste and an extremely potent effect.  There are two main extraction methods, each with their pros and cons.

Visit a cannabis dispensary near by and talk with a knowledgable and friendly budtender who can help you discover the best dab gear and rig for your needs. A Vibe by California cannabis dispensary near by carries all the the necessary tools for dabbing and has the widest selection of concentrates to choose from so it’s easy to find what’s right for you. Try a dab today and puff away!